Applications of Operational Amplifiers in Tamil

The circuit operation can mathematically be expressed as

The voltage VoA at the op amp output is

To summarize the operation of the circuit, 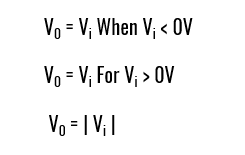 UP NEXT IN Linear Integrated Circuits