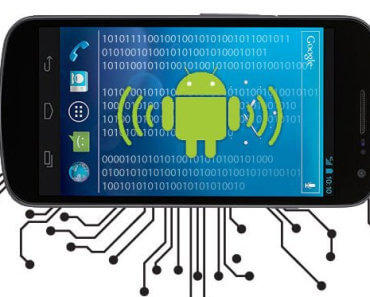 [Latest] 20 Best Hacking Apps For Android & iPhone 2017 - Hacking - The apps are best and may effortlessly run on any version of devices which you are using.

If you are inquisitive about performing some hacking attacks together with your android and iPhone then pass for quality hacking apps and gear 2017. Here are 20 Best Hacking Apps For Android & iPhone that you could use in each gadgets to do masses of hacking assaults. The apps are best and may effortlessly run on any version of devices which you are using. Download the app which you like under.

SpoofApp enables us to spoof (Place) calls with any caller ID number. To spoof calls we wants SpoofCards which are sold separately. Some other features includes voice changer using which we can modify our voice. You can also record the whole conversation. If you are installing the app for first time then you will receives a free 5 minute SpoofCard.

This is a good android hacking app, using this app you can hack private WhatsApp chats, pictures, audios and videos of your friends who are using your WiFi Hotspot. It is noticed by antivirus so deactivate your antivirus before using this app.

It can be used to reverse engineer any android app, that is you can get the source code of any android application and edit it in order to remove licence and credits.

I get number of questions regarding Facebook hacking. DroidSheep enables us to do exactly the same. It allow us to capture social account by hijacking sessions on android devices present in your network. But first you need to first learn how session hijacking works ?

These are some improved hacking apps which are especially designed for security professional and security researchers.

This app is designed for security professionals to perform different types of exploits. It has different kind of hacking tools like :

Nmap is a well-known network security scanner which is also available for android devices. It is used by professionals for network exploration. It works on both non-rooted and rooted phones, But if your device is rooted then you have access to some more features.

dSploit is an advance toolkit to perform network security calculation’s on smartphones. It is a complete toolkit so you can perform various attacks like password sniffing, real time traffic manipulation, etc

Penetrate pro is used to calculate WPA/WEP keys for some routers which means it’s miles used for wifi deciphering. Some antivirus can also flag the app as virus as it makes use of some safety permissions.

Keyloggers is a type of a malware which data every unique letter whilst it is typed and in which including passwords, messages etc. It’s far used for spying and hacking the credentials of others. Although for my part I bet keylogger on a cell device, like apple iPhone can’t be of a whole lot fulfillment, because of incapability to switch the infected report, however in case your iPhone’s display catches many special thumbs then you can in reality hack a few logins. It’s far the primary keylogger launched for apple gadgets.

With Wifiaudit you can hack wi-fi networks, first thing you need to do is to scan the wi-fi networks round you. With this application you’ll be capable of decrypt WiFi passwords that have WEP and WPA encryption. For the checks I should do, Router Keygen is one of the satisfactory programs to hack wifi, it’s miles powerful to expose the wifi password of a community if the SSID and password of the router has now not been changed and works simplest with some Router models.

It is the quality app to crack wifi password. On every occasion we talk of hacking apps for iPhone, most of the search results on search engines like google are pointing at apps made to crack the wifi password, even though I agree with iPhone without net guide at any point is useless, so sure this software keeps a sturdy position on this listing. iWep is the fine tool for cracking the wifi password which works offline too.

We can’t miss an app for offering hacking news to all geeks around here. Hackernode is a simple and smooth app with well designed interface to surf HackerNode on your iPhone or iPad. It is free for a limited time at the moment and it has alot of features. You can view active pages, best one of them, ask them and the new ones ofcourse, also details about users and their comments and submissions are viewable. A strong search engine helps you sort articles of your interest and you can save important search keywords. Even the history is saved on your device only and you can view pages you’ve already opened before. You can share the article on many social networks like Facebook, twitter, Instapaper, Evernote, Pocket etc and can mail them too.

That is a geeky app with lesser hacking use but can without a doubt be used in case you are surrounded through your MAC/pc as much as you’re with your smartphone. Veency is the best app out of many different ones available in the store providing VNC access to on your remote pc from your iPhone (jailbroken) to access many features. It allows you to call or answer telephone calls and you can also communicate via audio system and mic or Bluetooth headset. But what makes it greater notable is the enjoy of each iPhone app to your computer. It provides exceptional revel in of iphone on pc.

Network utility is an iPhone app which is more useful for web developers who want to test their site. Also for testers, it is so easy to ping a site and it is just a click away before waiting for the site to try loading and then fail eventually. It also provide other information like IP address of the domain and it can be extracted from the ping results too, but the information is not confidential or private.

This app is very popular in the wifi hackers that use iphone as wifi hacking tool as they know that these apps can enables them to bypass the securities of wifi using their iphone and they can easily crack the passwords. You must use these app for legal purposes only.

This is a completely reachable app that a non technical man or woman also can use. This app sends packet into the wifi network cracks the security and allow consumer to connect with the community to be had. The main operating of this app is much like the alternative two apps.

This app is just tremendous as this app finds the wifi password for you and with that you can do anything like hack into router settings, allow and disallow other device to connect to wifi network and you can also hack the devices that are currently connected with the same wifi network.

One of the most famous app of iphone is Aircrack-ng for IPhone that enables you to crack wifi networks and break the network securities. This app is one of the Best iPhone Hacking Apps. So must try this app in your iphone and have fun with your iphone hacks.

Use these apps and do only legal things as Hacking is totally illegal, so do at your own risk.