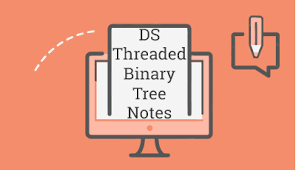 Threaded Binary Tree - learn in 30 secfrom microsoft awarded MVP,Inorder traversal of a Binary tree is either be done using recursion or with the use of a auxiliary stack.

There are two types of threaded binary trees.
Single Threaded: Where a NULL right pointers is made to point to the inorder successor (if successor exists)

Double Threaded: Where both left and right NULL pointers are made to point to inorder predecessor and inorder successor respectively. The predecessor threads are useful for reverse inorder traversal and postorder traversal.

The threads are also useful for fast accessing ancestors of a node. Since right pointer is used for two purposes, the boolean variable rightThread is used to indicate whether right pointer points to right child or inorder successor. Similarly, we can add leftThread for a double threaded binary tree. 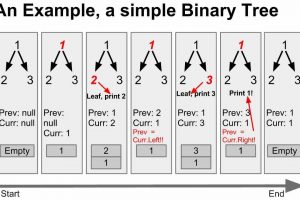 Python Program – Inorder Tree Traversal without recursion and without stack! 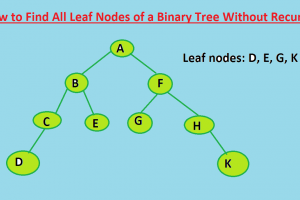 C Program – Inorder Tree Traversal without recursion and without stack! Program – Inorder Tree Traversal without recursion and without stack!