Today we are going to discuss the hidden feature of Facebook which gives you advantage of change name on Facebook after maximum limit. This Post will tell you the simplest technique to modify your profile name of Facebook. Mainly you will have to send an application to fill the form for name changing, after approval you will easily change your name after crossing limit on Facebook. Just Read the article and follow these steps To Change Name on Facebook after Limit. 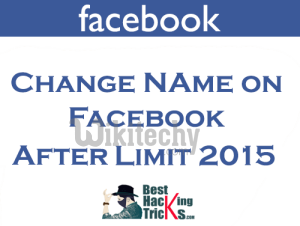 1. One Government or Any ID Proof Having your Image clearly visible.
2. You will have to choose that profile picture which is same as that in the ID proof.

Firstly you need to have to fill the form for requesting the changing name of Facebook profile. 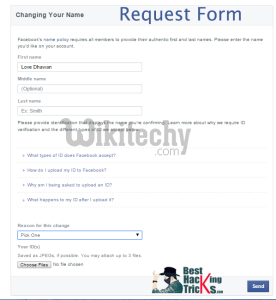 1. Open this Form from the account through you want to change name.
2. Enter Details accurately and fill the form carefully, all information about you that will be perfect and accurate typed.
3. Enter First, Last, Maiden Name Accurately which you want to show name in your profile.
4. Now upload the image which show your name and same as that in the ID Proof.
5. After this click on the “SEND” Button, and will have to wait for the approval from Facebook.

After the approval is confirmed or approved the Facebook will change your name automatically. Facebook rejects approval when you do not mention the reason of changing name on Facebook. Basely Facebook is totally work with rules of name policies so when your name does not match, it rejects your requests also. You can easily change Facebook name after limit of 60 days.