Error thrown even if a line is commented ?

What is a global statement in python ?

The purpose of the global statement is to declare that a function or method intends to change the value of a name from the global scope, that is, a name from outside the function. 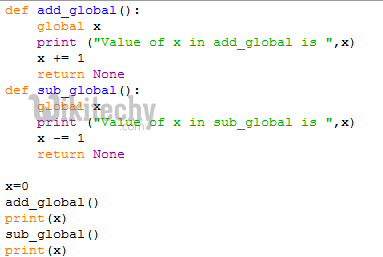 What is a lazy property ?

Python program to find the area of circle.

On Windows, what's the difference between the various Scripts folders ? What is the `is` function in Python ?

convert a number enclosed in parentheses (string) to a negative integer (or float) using Python ?

Creating a game in python ? only() method in Python ? 
UP NEXT IN Python Programming