Python is a widely used general-purpose, high level programming language. It was initially designed by Guido van Rossum in 1991 and developed by Python Software Foundation. It was mainly developed for emphasis on code readability, and its syntax allows programmers to express concepts in fewer lines of code. Python is a programming language that lets you work quickly and integrate systems more efficiently. There are two major Python versions- Python 2 and Python 3. Both are quite different.

Windows: There are many interpreters available freely to run Python scripts like IDLE ( Integrated Development Environment ) which is installed when you install the python software from http://python.org/

Linux: For Linux, Python comes bundled with the linux.

Following is first program in Python

Let us analyze the script line by line.

Line 1 : [# Script Begins]  In Python comments begin with #. So this statement is for readability of code and ignored by Python interpretor. 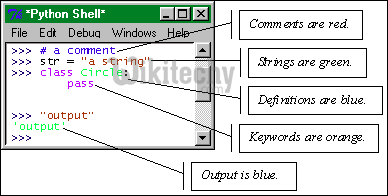 Line 2 : [print(“WikitechyQuiz”)] In a Python script to print something on the console print() function is used – it simply prints out a line ( and also includes a newline unlike in C ). One difference between Python 2 and Python 3 is the print statement. In Python 2, the “print” statement is not a function, and therefore can be invoked without a parenthesis. However, in Python 3, it is a function, and must be invoked with parentheses.

What Can We Do with Python?